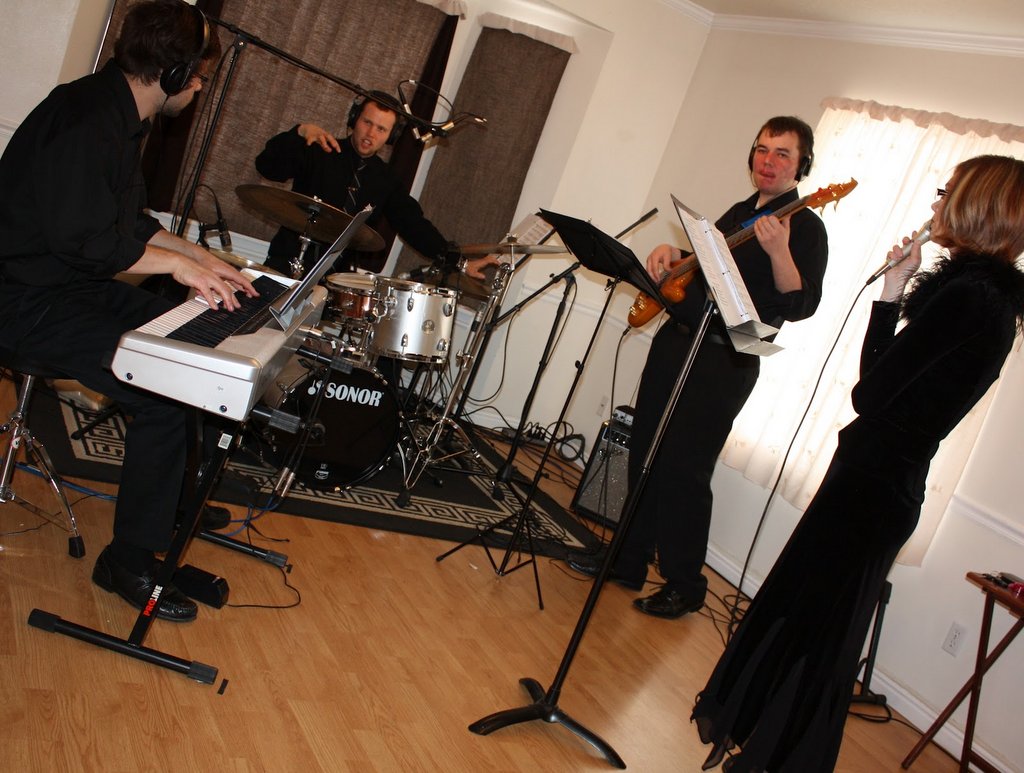 Recording success! After three days of intensive recording, we completed the remaining songs for three albums to be released this year.  Now we need a few vocals then we will be ready to mix, master, and release! See the photos here.

James Archibald, bassist. James has been with the band for over six years and is always good for comic relief in addition to solid bass lines. He debuted his singing voice last year on “Baby, It’s Cold Outside” and is back again for “Let it Snow, Let It Snow, Let It Snow” and “Let’s Call the Whole Thing Off.”

Zach Wiggins, pianist. Zach is new to the band and wows with his jazz chords! I am partial to his substitution chords. He astounds with mean Latin lines! His piano arrangement of “While Shepherds Watch Their Flocks by Night” is pure delight. He can take what may seem like a mundane chord progression and lift the accompaniment to soaring heights. You’ll love Zach’s talent for Latin the way it shimmers in “You’d Be So Nice to Come Home To.”

Jesse Quebbeman-Turley, drummer. Jesse is also new and fortunately for me, is Zach’s roommate. That’s how I found him! Jesse’s arrangements are fresh yet accessible. His understanding of melodic theory makes him a unique force as a jazz drummer. You will love his jaw-dropping soloing on “Dig That Crazy Santa Claus!” One of my favorite “Jesse” arrangements is “Santa Baby” as you’ve never heard it before!

Erik Chaston, sound engineer. Erik is a master of infinite skills. As my brother, he jokes that I’m lucky I have him to work for free. No joke though, Erik is the best! Without Erik, these days of recording would not have happened. He puts together old analog equipment with new digital technology so that my vocal recordings are lifelike and accurate.  He can fix just about any equipment and improve it!

Brett Bird, cinematographer. While Erik captures the sounds, Brett captures the movement. Thanks to Brett’s skills, we will have music videos to post on YouTube® of our recording sessions. Also, Brett takes great still pictures because he doubles as a photographer.

Justin Jensen, songwriting partner. Justin and I were paired in a songwriting class and our writing methods clicked! Our pop song, “The Moment” will be released as a single in the coming months. Our Christmas song “Santa Blues” will be on the next Christmas album. We have other songs still in the writing stages.  We are very anxious to finish and release those songs as well.

Mixing and mastering of the tracks is slated for early summer while Erik and I intern at Cumulus® radio in Iowa!

I will keep you posted as the albums near completion!  Fun times ahead!

Recording and Mixing the Next Single