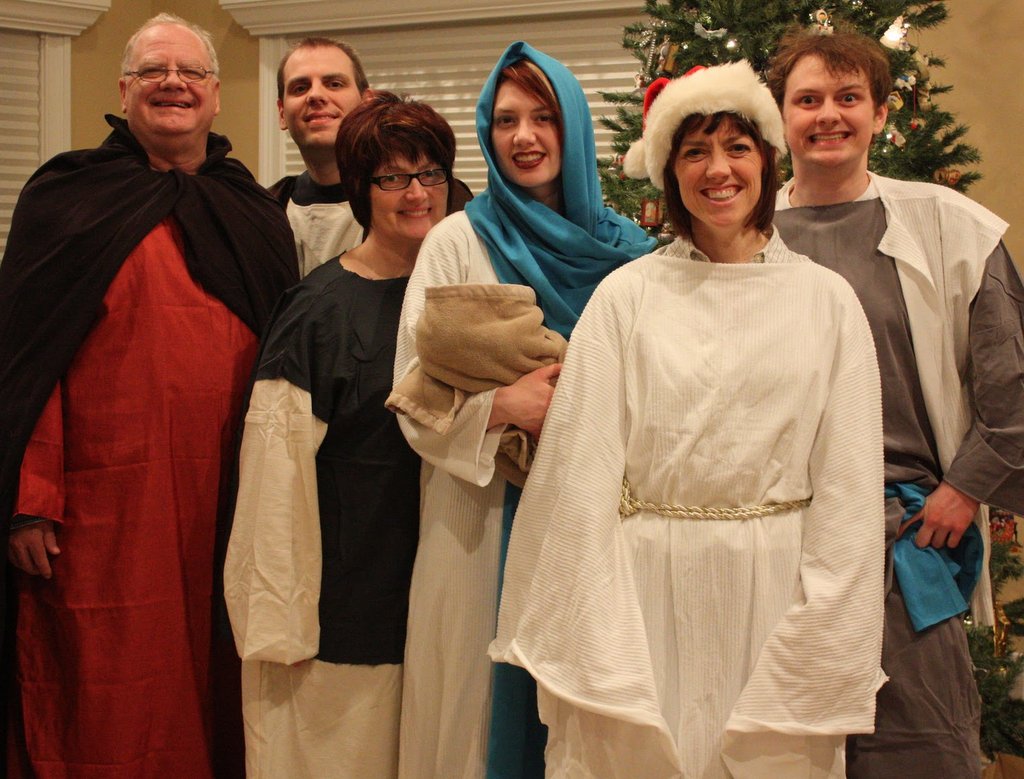 Every year my family reenacts the Nativity on Christmas Eve as we read from Luke 2.

Two years ago, my mom made all of us Nativity costumes. Before that, we always used sheets and pillowcases to make our costumes. So it was quite a treat to have real costumes.

Every year Amy is the narrator–with the costumes, she now also doubles at the angel. In my younger days, she was also the donkey that Mary rode on, but after I turned seven, I was a bit too heavy for her to carry me on her back!

Usually dad films while mom takes pictures, but now that they have costumes, they sometimes join in, mom as a shepherdess and dad as a wise man.

When Erik was nine or ten he built a manger that we use every year. We put it on the front porch, empty, and then put a doll in it on Christmas morning. We bring it inside to use in the reenactment on Christmas Eve.

Sometimes pop culture makes its way into the play. One year, Darth Vader (aka Erik wearing a Darth Vader mask) was, appropriately, the innkeeper. And when Erik just didn’t think that frankincense and myrhh were as good as the gold, he brought gifts that made sense to him–some of his toys that he loved!

This year with the addition of Deno, our summer rescue Pembroke Corgi added to the family, I’m going to finish Deno’s sheep costume. Dylan, Deno’s predecessor, wore the unfinished costume, but past away October 2011. It was a sad Christmas without a dog last year! But we’re excited to share Christmas with Deno!

One of my favorite religious Christmas songs is “I Heard the Bells on Christmas Day.”

What Are You Doing New Year’s Eve?